‘The Hound of the Baskerville’s’

Talking to practising clinicians while I was in Big Pharma felt akin to ‘letting slip the dogs of war’  for selling my soul to the ‘villain’. All and sundry demand that drug prices decrease and research in innovative molecules increase and they expect shareholder controlled, for-profit pharmaceutical companies to bear the brunt of it. However this is by far the most unsustainable, utopic model one can think of! Keeping the emotion aside, it’s like asking Tesla to spend years and billions on research for a car, smarter and faster than the ‘Model X P100D with Ludicrous Mode’ plus sexier than a Maserati but sell it at the price of a Nano.

The Tufts Center for the Study of Drug Development estimates the average cost of developing a new drug at US$2.55 billion right from discovery and development through to preclinical research, clinical research, FDA review, and FDA post-market safety monitoring. A potentially 10-12 year-long process, with a considerably high failure rate. Switzerland-based Novartis, for instance, attributed a 15% drop in its Q1’17 net income to a failed Phase III drug intended to treat heart failure and Tenax Therapeutics’ main drug failed in a Phase III trial meant that two months later the CEO resigned, and the company was reportedly considering a merger or sale. The cost of failure is more pronounced for smaller bio-pharma and drug manufacturing startups. This high cost associated with drug R&D ultimately affect healthcare prices for doctors and consumers. R&D costs — not just of successful drugs, but also ones that failed during the research process — is an oft-cited reason for exorbitant drug prices.

‘The Adventure of the Illustrious Clients’

To accelerate drug discovery and reduce the costs of drug development, pharmaceutical companies are introducing AI technologies such as machine learning and deep learning into the processes. It kicked off with Merck – Numerate partnership and since then numerous drug companies have entered partnerships with companies or acquired them,

The first step, drug discovery, typically involves one of four scenarios: finding new insights into a disease, finding possible effects of a drug by testing molecular compounds, re-purposing existing drugs, or manipulating genetic materials. At the drug discovery stage, thousands of compounds may be potential candidates for development as a medication. They need to go through a series of tests and only a small number will advance to further research as molecules for promising drug candidates, followed up carrying out a number of tests in the hope of finding a winner. This is an expensive exercise that takes an enormous amount of time. How then can we bring about a reduction in the cost of drug discovery and by extension decrease in the price of drugs? The solving of this complicated, convoluted ‘Game of Shadows’ is worthy of an entire Sir Authur Conan Doyle series since a short story and/or a novel certainly won’t cut it!

A great Holmesian mind is needed to cut through the clutter and an ‘artificial one’, in AI, has provided some solutions that this article details with a Watsonian/Doylist twist. 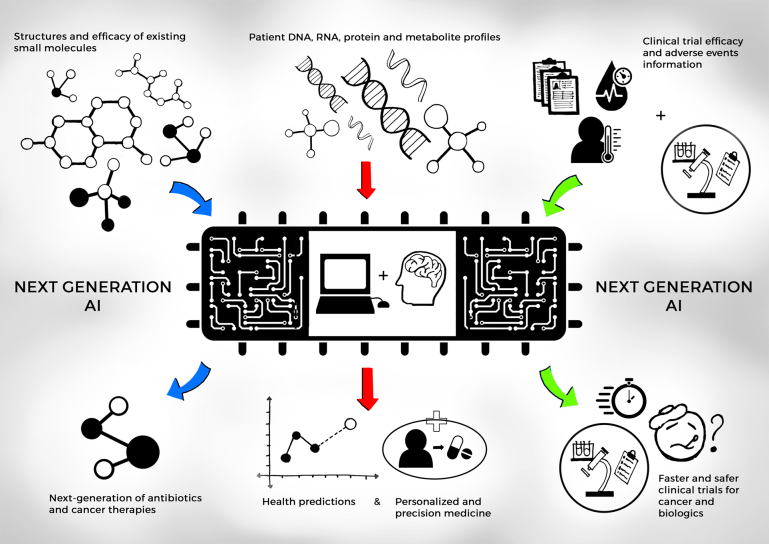 Finding new compounds for a medicine is laborious and time-consuming because of the innumerable possible combinations based on medical data in genes, proteins, metabolites, molecular structures, and biological information. Deep learning algorithms can process the same information much faster. Existentia and Atomwise’s Atomnet, can speeds up the process of identifying molecules as potential drug candidates with these molecule simulations said to be more effective than physical high-throughput screening methods, and can also provide a better understanding of the toxicity, side effects, and efficacy of a drug.

Drug Repurposing, also known as drug repositioning or therapeutic switching, is the application of known drugs and compounds to treat new indications. One advantage of drug repositioning is that these molecules have already passed a series of tests, and so have less risk of unexpected toxicity or side effects. This is not research commonly undertaken especially if the molecule is post the Loss of Exclusivity period since it can render the return on investment rather questionable to shareholders. With the help of machine learning algorithms, companies can repurpose drugs faster and at lower costs than developing new drugs. Such tests are currently being conducted by Teva and Astellas in partnership with IBM and NuMedii respectively

This has been the buzzword for quite a while and no AI article can claim to be complete without giving it a mention! The chicken and egg caveat is that a large hoard of information is required at an individual level to make this a reality. Recursion Pharmaceuticals works with Sanofi to identify uses for clinical stage molecules in the treatment of genetic diseases. Recursion uses computer vision to do image analysis of individual cells, screens them across a library of genetic disease models, and uses machine learning technology to derive new indications and adverse effects.

Clinical trials, are currently classified into five phases and usually require more than three thousand test subjects to proceed from phase one to phase three. Most pharmaceutical companies use recruitment firms to find clinical trial subjects by manually examining individual medical records a time consuming and inefficient task. Roughly 80% of clinical trials fail to meet enrollment timelines, and approximately one-third of Phase III clinical study terminations are due to enrollment difficulties, according to a Cognizant report. To put it in context, there are over 18,000 clinical studies in the US alone that are currently recruiting patients. Machine learning is being used to train a model that includes age, sex, treatment history, and current health status to build an inclusion/exclusion criteria that will speed up this aspect of clinical trials research increasing the efficiency both from a financial and a chronological perspective. This is steadily becoming a crowded space with Trials.ai and Deep 6 AI just two of the numerous companies working on recruitment. From an adherence perspective, in addition to using mobile tech to send patients reminders to take their medication, pharmaceutical companies Pfizer and Novartis have been investing in IoT and “ingestible sensors” to track drug intake. In Q1’17, Merck Ventures participated in a $14.5M Series B to Medisafe, which develops wireless pill bottles.

Less than 10% of potential medicines make it to market, meaning millions of testing hours and dollars are spent on each fallen angel drug. Eager to find ways to use that research data, manufacturers are turning to AI to find new ways to repurpose drugs that have already gone through the early stages of testing. By doing that, the turnaround to market is faster and less expensive than starting from scratch.

Although gaps exist like discrepancies, biases and lack of diversity in the data the potential is tremendous. Developing nations again will lag behind given the lack of datasets in a country like India. However, with the capability to look at 14 trillion data points in a single tissue sample AI can help eliminate the years lost in trial-and-error drug development. AI has the potential to shave millions—maybe trillions—of dollars off the cost of drug development and maybe/possibly even the eventual cost to the consumer. Drug pricing, with or without AI, will forever be anything but ‘elementary’!

More on the future of healthcare